It is said that the island was first discovered in 1543 by the Spanish captain, de la Torre. According to records it is clear that Captain Gelett of the Hawaiian mission ship, the “Morning Star” visited the island in 1864. His report is believed to be the first regarding the island by stating, “The island has white beaches and is thickly covered with trees and shrubs. ” Captain Kilton of the “David Goadley” came after him in 1868 and abstractly referred to the island by saying, “It is a low island with sandy beaches, covered with trees and grass.”

In 1874, Captain Belknap of the American survey ship, the “Tuscarora” marked the location of the island for the first time as 154 degrees east longitude, 24 degrees 14 minutes north latitude. Later on in 1880, Captain Folny of the French battleship, the “Eclai-leu” marked the location as 153 degrees 57 minutes east longitude, 24 degrees 30 minutes north latitude. These were the first two scientific reports. However it seems at that time the island was considered to be part of the Mariana Islands of the Spanish territory.

The name Marcus Island is said to have been given by an American missionary.

The first Japanese recorded to visit the island is Shinzaki Jotaro of Kochi prefecture, who came on a British vessel of the company he belonged to (Yoshida Otohiko: Earth science magazine/ 1902, volume 16). This is uncertain but it is also said that Saito Kizaemon of Shizuoka prefecture discovered or landed on the island in 1879 (July 26, 1902, Tokyo Shinbun).

In June 1889, Captain A. Rosehill of an American sailboat discovers and lands on Minamitorishima. After learning that the island was uninhabited, he finds value in the island, as there was plenty of palm oil and guano. He then mistakes himself to be the first discoverer of the island and raised the American flag on a palm tree. Upon returning to Honolulu he requested his discovery to be acknowledged by the United Sates Department of State through the American minister stationed in Honolulu. However his request was not handled through official procedures. His report remained as just a record within the United States Department of State and was left that way for 13 years.

In 1896, Mizutani Shinroku of the Tokyo Kinju Company set sail on a sailboat in search for natural resources in the South Pacific. During the journey he was struck by a storm and drifted onto Minamitorishima on December 3 of the same year. After landing he explored the island and confirmed potential for cultivation. On December 28 he had 23 people from Ogasawara move to the island and reported the location of the island as 152 degrees 35 minutes east longitude, 24 degrees 25 minutes north latitude to the Japanese government. Based on Mizutani’s request, the Japanese government named the island as “Minamitorishima” by order of the Home Ministry on July 19, 1898. On the 24th of the same month, the prefecture of Tokyo announced the designation of Minamitorishima as part of Ogasawara village of Tokyo prefecture. Then the Japanese government agreed to loan the island to Mizutani Shinroku for 10 years from December 1898. The main industry on the island was collecting palm oil and guano.

On July 11, 1902, Captain Rosehill set sail from Honolulu to Marcus Island once again. Since visiting the uninhabited island rich with palm oil and guano, he had wanted it to be occupied by the United States. Upon receiving this report, the Japanese government feared the occurrence of a dispute between the Japanese living in the Japanese territory of Mizutani village, Minamitorishima and A. Rosehill. As a measure the Japanese government dispatched the battleship, “Kasagi” to the island. Junior Lieutenant Akimoto Hidetaro and his men arrived on the island in July of the same year. When A. Rosehill arrived three days later, they told him that Minamitorishima had already been occupied by Japan, and he returned to the United States without any conflicts occurring. However A. Rosehill presented this case to court as an international issue, which was examined by both Japan and the United States. Eventually Minamitorishima was confirmed as Japanese territory. 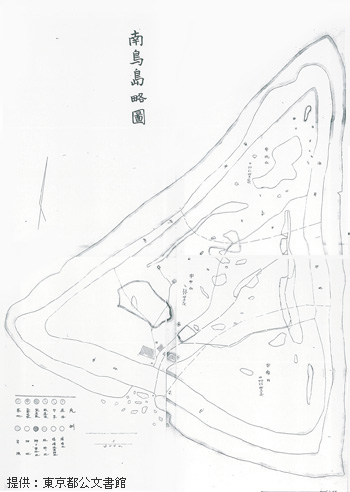 In May 1902, “Mizutani village” was made in the center of the southern side of the island. 29 males, 25 females, and 4 children were confirmed on August 28 of the same year.

The industry of the island was handed over to the Minamitorishima limited partnership company in 1903. Its main operations became feather/ guano collecting, fishery, canning and stuffing chicken, and shipping them to Yokohama for sale.

In 1922 the Minamitorishima limited partnership company becomes the national fertilizer company. The collecting of guano became a large-scale operation as trolley rails were constructed in the central area of the island. The island became active, as the annual production amount was 1,000 to 3,000 tons. The number of residents also became 30 to 50 people.

In 1933 the H1H (an aircraft of the Imperial Japanese Navy) of the Tateyama Naval Air Corps of the Japanese Navy was sent to examine Minamitorishima. There were about 5 houses and the main work of the people there was fishing.

Life on the island at the time came with difficulties, as it was isolated and remote. In addition to difficulty with the acquisition of supplies, there were problems with beriberi and epidemics. People also had to withstand damages from strong winds and high tide as the elevation of the small island was low. Among the 50 residents who lived on the island in August 1902, 19 had died due to dysentery that spread in November of the same year. Work declined as resources became depleted, and the island became uninhabited in 1935.

During the War – End of the War

The Japanese Navy was stationed on Minamitorishima in 1935. The houses and facilities such as factories were taken apart for the construction of new military facilities. Weather observation was started from October of the same year by the coast guard weather team of the navy. It became focused on as a military post in 1936 as general military facilities such as 1,500m and 600m airfields, barracks, communication office, and a pier on the south coast was constructed. Wars began to escalate such as the Second Sino-Japanese War and the Pacific War. The military importance of the Minamitorishima increased and the whole island was fortified. During the Pacific War the Minamitorishima guards under the Yokosuka Naval District (navy), the Nankai second garrison (army), the Yokosuka Naval Air Corps, and the Minamitorishima contingent force (six attack bombers) were in charge of the defence as well as anti-submarine patrol, with approximately 4,500 soldiers deployed. There were no landing battles nor battles on land during the war. However there were many casualties due to repeated bombings and naval gunfire by the U.S. Armed Forces. Eventually the U.S. Armed Forces never landed on Minamitorishima until the war ended in August 1945. As the war ended all officers and soldiers of the Japanese army were discharged and sent back to the mainland. The island was placed under control of the United States, and the name of the island became Marcus Island. In 1947 the high tide caused by a typhoon washed away a large section of the island. For this reason the U.S. army that was stationed withdrew from the island, and Marcus Island became once again an uninhabited place.

After the War – Present

1967 : Agreement with the reversion of the Ogasawara Islands in the meeting between Prime Minister Sato and President Johnson.

June 26, 1968 : Reversion of the Ogasawara Islands. Along with the reversion the Minamitorishima Air Corps of the Maritime Self Defence Forces and Minamitorishima observatory of the Meteorological Agency is placed, and began operations.

March 1993 : An atmospheric background pollution observatory is established and begins observations. The LORAN C Station is handed over to the Japan Coast Guard from the United States and began operations.

April 1996 : Start of observation of tsunamis originating in distant locations.

December 2009 : The local staff of the Japan Coast Guard ended their service along with the abolishment of the LORAN C Station.