Mr.Ogasawara retired from the Ogasawara Village Goodwill Ambassador in February 2016.
Thank you very much for your cooperation as a Goodwill Tourism Ambassador for more than 16 years from 1999.

Michihiro Ogasawara achieved 2,000 hits on May 5, 2011. He became the 38th player in Japanese baseball history to achieve this great record. In commemoration of his accomplishment, the Ogasawara Village Mayor and representative of the Ogasawara Fighters presented him with a special, mini-sized barrel of Ogasawara Rum at the “Ogasawara” present night game. 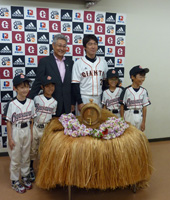 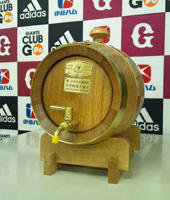 Mr. Ogasawara gifted the children’s baseball team, “Ogasawara Fighters” with a team uniform. The children were extremely content as they did not have uniforms until then.

Tourism
Copyright © Ogasawara Village Office. All rights reserved.
back to the top page