The Kazan islands (Iwo Islands) consist the three islands of Kita Iwo-to, Iwo-to, and Minami Iwo-to running from north to south. They lie in between the coordinates of 24 degrees 10 minutes and 30 minutes north latitude.

Iwo-to positions itself in the middle of the Kazan islands, situated approximately 1,250km south from Tokyo, and approximately 280km south from Chichijima (24 degrees 47 minutes north latitude, 141 degrees 19 minutes east longitude). It is possible to see Kita Iwo-to from Iwo-to on a clear day.

In terms of latitude Iwo-to is located slightly further south than the northern tip of Taiwan. Having a subtropical maritime climate, the temperature is higher than Taipei, which is located at almost the same latitude, due to the ocean current.

The annual average temperature is 24 degrees, and the difference in temperature is 6 to 7 degrees at the largest. The highest temperature can reach 40 degrees on some days. Most days are over 30 degrees from the middle of June until the beginning of October, and even in February, which is considered to be the coldest month in the year, is still 12 degrees.

Before the war it is said that the people had a “Tensuisou (a type of water tank)” in each house to keep rain water, and used that for drinking water.

The Kazan islands are located on the Fuji volcanic belt. Eruptions have not been recorded on Minami Iwo-to and Kita Iwo-to. However, volcanic activities on Iwo-to have been ongoing since its discovery. The digging of the mineral resource “sulfur” was one of the purposes for people settling here in the Meiji period. On January 19, 1986, there was an eruption of a submarine volcano off the northeastern coast of Minami Iwo-to, which created a new island but disappeared later on due to strong waves and wind. In this way there are ongoing submarine volcanic activities along the Fuji volcanic belt.

The topography of Iwo-to has two volcanoes of Motoyama on the northeast section and Suribachiyama (Mt. Suribachi) on the southwestern section connected by Chidorigahara, a developed coastal sand dune. The island has an area of approximately 22km2, which is almost the same size as the Kita-ward of Tokyo. The topography is fan-shaped, beginning from Suribachiyama and spreading out towards the northeast. The island has a circumference of about 22km, and the length from the northeast to southwest is approximately 8.3km. The length of the smallest section, which is the southern section of Chidorigahama, is approximately 800km. There are a few natural hot springs along the seashores nearby.

On Iwo-to there are active protrusions of the land from 10 to 30cm in a year even to this day, and coastal terraces are still developing around the island.

It is said that before the war, regular lines from Tokyo anchored somewhere between Iwo-to and Kamaiwa. After the reversion however, Kamaiwa became connected to the main island by a sand bar and has become a section of the island. There are also concrete vessels that have become trapped in the mainland among those that were placed by the U.S. army for the construction of a port after the war.

The elevation of the plateau in the northeastern section is approximately 110m and the central area is called Motoyama. There are sulfur gas craters around this area and were used for extracting lemon grass oil before the war.

Most of the residents on the island lived on Motoyama or around the plateau before the war.

Suriachiyama (Mt. Suribachi) in the southwestern section is a volcano with an elevation of 169m and has a crater at its peak. The view from Suriachiyama is spectacular, where the south coast, Chidorigahara, the direction of Motoyama, Minami Iwo-to, and Kita Iwo-to are visible.

The plateau of Motoyama is made from a tuff called Dotangan (mudstone rock). Mudstone rocks can be easily cut out using a saw and are so soft they can be planed with a wood shaver. It was an extremely precious local rock that was also applied when making ovens as well as chimneys since it was resistant to fire.

There are relatively fewer endemic species on Iwo-to compared to Chichijima, as it is a new volcanic island.

The Ogasawara Okomori (Bonin Fruit Bat), a natural monument, is the only mammal living on the island.

Plant colonies of Tamana (Brassica Oleracea) and Takonoki (Pandanus Boninensis) are said to have existed. The leaves of Takonoki, referred to as “Takoppa”, were commonly used especially for thatching the roofs of houses.

Iwo-to was once a peaceful island, blessed with rich subtropical nature. However it became a forefront base for defending the mainland along with the intensification of the Second World War. The residents were forced to evacuate to the mainland, and the land of their forefathers became a battlefield where many precious lives were lost.

After Iwo-to was ruined by the war its scenery was completely changed as U.S. military facilities were also constructed. It is still in a state where no remains can be found even in areas that are assumed to be what once was a base for the islanders.

Even after the reversion of all areas of the Ogasawara Islands on June 1968, the islanders of Iwo-to have still not been able to return to their homes.

In consideration for the former residents of Iwo-to who are still facing this situation, the Ogasawara village constructed the Iwo-to Tomin Heiwa Kinen Bochi Koen (Iwo-to Islander Peace Cemetery Park) at a place that used to be a cemetery for the residents of the island, with the support of related organizations. This facility is a symbol that prays for peace on places where battles took place during the Second World War. It is also a monument that leads to the graves for former residents, and serves as a place for rest when visiting Iwo-to.

June 21, 1996 The unveiling of the Gyokokei Kinennhi (Monument for the visit of the Emperor and Empress).

Former residents of the island are entrusted by the Ogasawara village with the maintenance of the Iwo-to Tomin Heiwa Kinen Bochi Koen (Iwo-to Islander Peace Cemetery Park) six times a year. 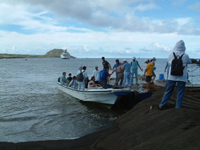 The Tokyo Metropolitan Government provides service that allows former residents of Iwo-to to visit the graves of their families by using an airplane. However they are unable to go to the villages they used to live in and have difficulty visiting the graves of the troops their family members belonged to in the limited time they are given. They are usually rushed to leave their homeland each time they visit.

The visit to Iwo-to is made possible largely because of the support as well as cooperation of The Marine Self Defence Forces and Kajima Corporation.

Recovery of the Remains of Soldiers

Iwo-to experienced severe battle during the Second World War, and the recovery of the remains of soldiers has been an important issue since after the war. The number of those who died in battle on Iwo-to is 20,129 according to the investigation by the Social Welfare and War Victims’ Relief Bureau of the Ministry of Health, Labour and Welfare. Most of them are believed to have died from the fierce attack of the U.S. Armed Forces. However it is also believed that many died in the deep sections of underground trenches due to being flamed, flooded with water, shot, or attacked with grenades.

It is believed that the U.S. Armed Forces handled the remains found above ground, thus there is the possibility that some remains may be left in areas of the jungles that cannot be easily searched. The full length of the underground trenches is 18km and it is also said that there were a few thousand entrances into the trenches. Since there are many trenches that have been closed by the U.S. Armed Forces not much is known regarding the state of the remains within the trenches.

Former residents of Iwo-to are the families of those who died in battle and have a strong desire to return to their homeland as well as be able to visit the graves of their families. On the other hand the emotions of families of those who died in battle as well as survivors towards Iwo-to is something very delicate. In this way Iwo-to is an unforgettable place as a “homeland” and “the land of the spirits who died in battle”. The Social Welfare and War Victims’ Relief Bureau of the Ministry of Health, Labour and Welfare have been recovering the remains of those who died in battle with the cooperation of former residents of Iwo-to. Since 2000 the “Ogasawara-Mura Zaiju Iwo-to Kyu-Tomin no Kai (Organization of the former residents of Iwo-to residing in Ogasawara village)” and “the Ogasawara village” became delegates of the Ministry of Health, Labour and Welfare. From 2003 the village became entrusted with partial work regarding the recovery of the remains, and are carrying this out through cooperation 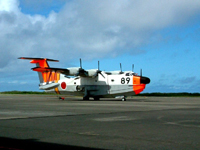 Emergency patients in Ogasawara village are mainly transported by a flying boat (US-1) directly from Chichijima to the mainland. In the case of Hahajima, patients are first taken to Iwo-to by a rescue helicopter of the Marine Self Defence Forces and then by flying boat to the mainland as flying boats cannot be flown to Hahajima.

Depending on the situation, patients on Chichijima may also be transported to the mainland via Iwo-to using a rescue helicopter and flying boat.

With the cooperation of Japan and the United States and based on the U.S.-Japan Security Treaty, the U.S. Coast Guard remained for the maintenance of the LORAN station that served to confirm the locations of aircrafts and vessels. However the LORAN station became disused after the Marine Self Defence Forces were transferred. Today the area of the facility is used as a “communication office of Iwo-to”.

There is also an “area of the communication office of Iwo-to” being used off the west and south coast as an entry point from the sea for loading and unloading.

The U.S. Armed Forces uses the sea berths as well as runways together with the Marine Self Defence Forces, and NLPs (Night Landing Practices) are being temporarily being carried out using aircraft carriers since 1991.

The main runway is 2,650m × 60m and there is a parallel taxiway with a size of 2,650m × 30m used as a runway for emergency. Main operations are air traffic control of the airbase, meteorological observation, stand-by for rescue operations in nearby waters, disaster relief operations (transport of emergency patients of the Ogasawara village falls under this), and so on. [From the Maritime Self Defence Forces Pamphlet] The Air Self Defence Forces Iwo-to Airbase was newly formed from January 1984. This airbase controls flight training on Iwo-to with the main operation of logistical support. [From the Air Self Defence Forces Pamphlet]