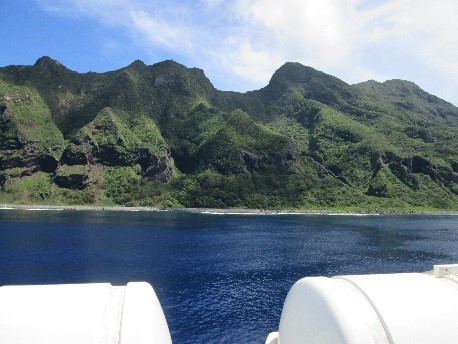 The coasts are cliffs with the exception of a small section. There are two peaks in the north and south, which are the Shimizumine (665 m) and Sakakigamine (792 m).

In 1920 three ground stone axes were presented from Heinojo Ishino to a professor of Tokyo University, and these served as hints for the discovery of ruins on the island after the reversion. The industries of Kita Iwo-to were agriculture that focused on sugar cane farming, harvesting of Maru-sazae (a type of turban shell (Turbo Marmarostoma setotus Gmelin) used for processing into buttons made from shells), and manufacturing of dried scad.

At the time of evacuation in 1944 there were 17 households and 90 people living on the island. After the war it became uninhabited and has remained so since June 26, 1968.

In 1991 a research group of Tokyo discovered altars, ruins of graves, stone tools, and earthenware that are believed to be from sometime between the 8th century and the 15th/16th century. This proved the existence of people living on the islands before the history about the discovery and settling of the Ogasawara Islands we know as of now. These findings are thought to have been influenced by Micronesian culture, as they are completely different from the Jomon/ Yayoi cultures of the mainland. There is the theory of culture spreading from the Mariana Islands-Ogasawara Islands-Izu Islands-the mainland of Japan. However this discovery suggests a very intriguing possibility of another traveling route of culture across the sea.